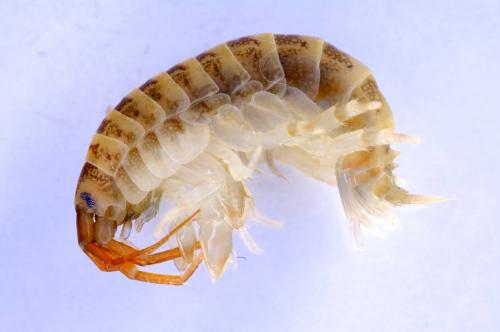 The killer shrimp is a crustacean that is native to eastern Europe and was first recorded in the UK in 2010. This first sighting was at Grafham water in Cambridgeshire and since then they have also been identified at various sites across England and southern Wales including multiple confirmed sightings in East Norfolk. The shrimp can grow to up to 30mm in length and has large mandibles that make it a very effective predator. Their diet includes native aquatic invertebrates, fish and their eggs and the aquatic larval stage of terrestrial insects. This species can breed rapidly, reaching at sexual maturity at 4 to 8 weeks and with each female capable of producing up to 50 eggs at a time. They can breed at any time of the year, so long as the water is above 13C and can survive in slightly saline water and water with very low oxygen levels. They spread from location to location on angling, boating and other water leisure equipment and the best way to prevent their spread is to follow the Check, Clean, Dry protocol between waterbodies.

I've found a Killer shrimp, what should I do?

If you think you have found a killer shrimp, try to get a clear photograph of it and send this to nnnsi@norfolk.gov.uk. This is very important as once the shrimp gets established in a water body, it is almost impossible to control.