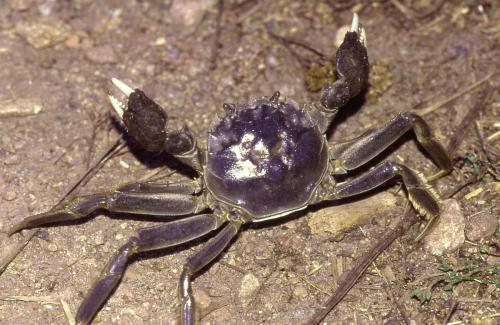 The Chinese mitten crab is native to East Asia but has been introduced to North America and Europe over the last 200 years. They were first recorded in the UK in 1935 in the Thames estuary and have gradually spread around the south of England, mainly being moved from site to site in the ballast water of ships. This species has been reported a handful of times in Norfolk, around the wash, along the north Norfolk coast and once in great Yarmouth.

Adult crabs can be easily identified with their large size and the dark mitten like growths that they develop on their claws. They have a complex reproductive cycle where they need both fresh and salt water so successfully breed. Young crabs migrate into fresh water to grow and become sexually mature. This first migration occurs in the spring and the crabs remain in freshwater for 3 to 5 years. Then, in the autumn the adult crabs migrate back to salt water to release their eggs. Some of these adults then die but others will head back to freshwater with the young in the springtime and will breed for multiple years. It is during these spring and autumn migrations that the crabs are most noticeable as they gather around sluice gates and natural river barriers waiting for the opportunity to pass.

This species could pose a real threat to Norfolks biodiversity as they can form dense burrowing colonies in riverbanks. This can cause erosion, the silting up of water ways and the crabs themselves prey upon native fish, crustaceans, and invertebrates.

I've found a Chinese Mitten Crab, what should I do? 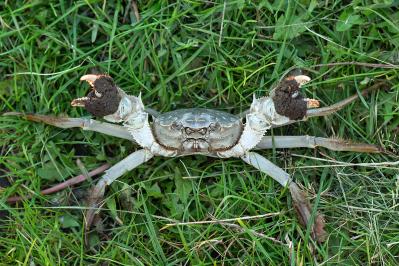 Unfortunately there is currently no successful method for eradicating Chinese Mitten Crabs once they have became established in an area. As such, the best way to slow or prevent their colonisation across Norfolk is to know where the edge of their range is and stop them from spreading further. If you see a Chinese Mitten Crab, you can report your sighting by sending it directly to us at Norfolk Non-Native Species Initiative at NNNSI@norfolk.gov.uk