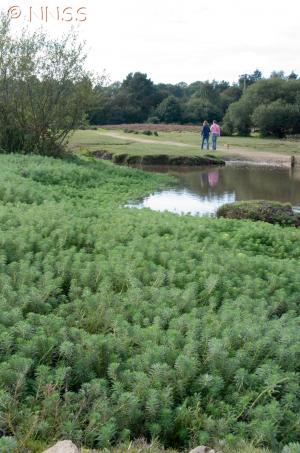 Parrot's feather (Myriophyllum aquaticum) is native to Central and South America and has been grown in water gardens in the UK since 1878. It is an aquatic perennial plant with blue-green leaves which has both emergent and submerged forms. The plant is most often found in slow flowing or still, eutrophic (nutrient rich) waters. First found in the wild in 1960, it does not spread by seed (as all the plants in the UK are female) but is able to re-grow from small fragments from the parent plant. This method of dispersal combined with a relative lack of natural predators means that the species can spread rapidly through a water system.

Once parrot’s feather becomes established in an area, it can quickly out-compete native species and dominate the waterbody, causing flooding by blocking watercourses and drainage channels. Parrot’s feather can also reduce the amenity value of an affected water-body by making it unsuitable for activities such as fishing and boating. Particularly large infestations have the potential to cause significant impacts where dense growth could lead to disruption of natural river processes (e.g. erosion-deposition) and predator-prey dynamics as movements of animal species become restricted, it can block light preventing growth of other plant species, and it can lead to oxygen depletion in the water, when this species dies back it can significantly increase nutrient loading of water bodies. A large infestation can also facilitate increases in water temperature by absorbing sunlight which is perfect for mosquito breeding grounds.

Native to: Central and South America

I’ve found parrot's feather on my land. What should I do? 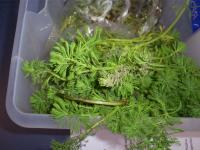 Parrot’s feather can be removed using either chemical or manual control techniques. Glyphosate based herbicide should be used on emergent growth, this will help to control the plant. Treatments should be conducted early and regularly (at least twice a year) between March and October. Manual pulling of the plant can be an effective control method although this should be done at least every 6-9 weeks to weaken the plant. Care should be taken to remove whole plants and avoid fragmentation.

I want to report an infestation of parrot's feather

If you are unsure whether you have parrot’s feather on your land images can be emailed to NNNSI and we can help with identification. We can also help out with management advice. If you report a sighting to us, we can update our records on the distribution of this species which will can be used to formulate future countywide management practices.