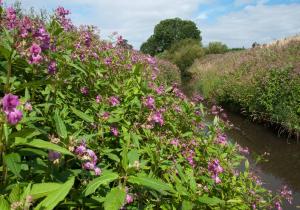 Himalayan balsam (Impatiens glandulifera) was first introduced to the UK in the 1800s as an ornamental plant and quickly escaped into the wild. With its attractive pink flowers and intriguing exploding seed pods, it is easy to see why Himalayan balsam was considered a desirable garden plant. Unfortunately, it has significant negative impacts on the natural environment.

Himalayan balsam forms dense stands of vegetation reaching 2-3 metres in height that shade out native plant species. It is also a prolific nectar producer, meaning that bees and other pollinating insects preferentially visit these plants, reducing seed production in native plant species and leading to decreased biodiversity. The diversity of native insect and ground dwelling species is often lower among Himalayan balsam stands because our native species are not used to feeding on this species.

Himalayan balsam is an annual plant which regenerates from seed each year. Each plant can produce around 800 seeds that can be launched from exploding seedpods up 7m from the plant, these can even survive and travel along watercourses meaning this species can easily spread along rivers and streams. Each winter, the dense thickets die back, leaving river banks bare and susceptible to erosion and collapse. 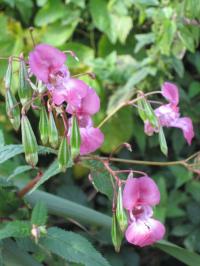 Native to: West and central Himalayas

I’ve found Himalayan balsam on my land. What should I do?

Small infestations (most common in gardens) can be easily controlled by pulling out plants by hand, as this species has very shallow roots. Large infestations can be controlled in a few different ways. A brush cutter or similar equipment can be used to cut down large stands. Care must be taken to cut each plant below the lowest node of the stem otherwise it will regrow. Regular grazing can also help to control this species. Himalayan balsam can also be controlled by spraying the foliage with a weed killer containing glyphosate in spring, before flowering but late enough to make sure that young seedlings are tall enough to be covered by the spray. Pulling should occur in April or May, before the plants go to seed. Plants should not be disturbed if seed pods are already visible to prevent further spread.

Himalayan balsam seeds can only survive for approximately 18 months so repeating your preferred treatment over a two year period can be enough to successfully eradicate this plant if there is no re-infestation from upstream or adjacent sites.

I want to report an infestation of Himalayan balsam

If you are unsure whether you have Himalayan balsam on your land images can be emailed to NNNSI and we can help with identification. We can also help out with management advice. If you report a sighting to us, we can update our records on the distribution of this species which will can be used to formulate future countywide management practices.

To record a sighting, take a photo, note the date and location and any other additional information such as abundance or size of infestation.